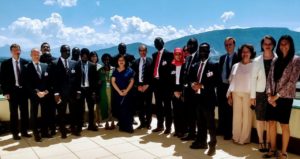 Members of G-NEXID assembled to attend the working luncheon with the International Trade Centre on 4 July 2018.

Geneva, 4-6 July 2018 – Under the auspices of the United Nations Conference on Trade and Development (UNCTAD), the Global Network of Export-Import Banks and Development Finance Institutions (G-NEXID) was formed in 2006 to facilitate cooperation amongst policy banks and similar institutions in support of South-South trade, investment and project finance. With membership drawn from across Africa, Asia, Eastern Europe and Latin America, among others, G-NEXID is headquartered in Geneva, Switzerland.

Held at the headquarters of the United Nations Office at Geneva on 4 July 2018, the workshop on “Addressing the trade finance gap through collaborative action” was jointly opened by the Network’s Honorary President, Mr Abubakar Abba Bello, Managing Director, Nigerian Export-Import (NEXIM) Bank, and Mr Richard Kozul-Wright, Director of Globalization and Development Strategies, UNCTAD.

Assessing the importance of the global finance gap, estimated at US$1.5 trillion by the Asian Development Bank (ADB), Dr Marc Auboin from the World Trade Organization (WTO) highlighted the challenges faced by developing countries, with a focus on the post-2008 financial crisis regulations and their impact on banks’ de-risking that contributed to the decline of correspondent banking relations. The presentation was used to provide an overview of key policy responses discussed in the framework of the WTO Expert Group on Trade Finance (enhancing trade facilitation programmes of multilateral development banks, reducing the knowledge gap in local banks, maintaining and open dialogue regarding regulations and monitoring of trade finance provisions).

This global perspective was followed by a presentation from the Secretary General of Berne Union, Mr Vinco David, on how credit insurance is used to attract trade finance as a contribution to addressing this gap and was followed by an overview of the trade finance programmes of the Asian Development Bank (ADB) and the European Bank for Reconstruction and Development (EBRD).

Subsquently, a roundtable dialogue was held between Dr Anthony Coleman, Senior Economist at the African Export-Import Bank (Afreximbank) and key G-NEXID members on specific capacity building programmes as a tool to address the widening trade finance gap. The workshop concluded with a presentation from Mrs Sangeeta Sharma, Chief General Manager, Export-Import Bank of India, on the trade finance gap, trends and the consideration of a proposal of a L/C Confirmation Facility amongst G-NEXID members.

The workshop included a working luncheon with Mr Anton Said, Chief Export Strategy from the International Trade Centre (ITC) on “Trade finance gap: SME Perspectives and Possible Responses through Collaboration”. Moreover, members of the Network had an interactive session with members of the Swiss Trading and Shipping Association (STSA) on the specificities of the trade finance expertise in Switzerland and the key takeaways from the workshop on 5 July.