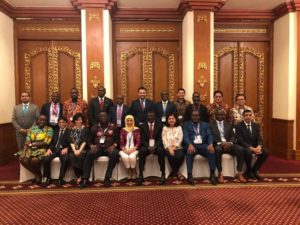 Bali, 9 October 2018 – The Exchange Programme –the third exchange programme of G-NEXID after the Export-Import Bank of India’s in 2016 and the Brazilian Development Bank’s in 2017– organised by Indonesia Eximbank for G-NEXID members successfully concluded on 9 October 2018 after 6 days of fruitful exchanges in Jakarta and Bali.

Resulting from these exchanges, and in spirit of the legacy of the 1955 Asian-African Conference (Bandung Conference), further opportunities for South-South cooperation were discussed, notably lines of credit and co-financing between G-NEXID members.

G-NEXID members also participated in other high-level meetings, including the joint panel of the International Finance Corporation (IFC) and the World Trade Organization (WTO) on “Financial Inclusion and Trade: Reducing the Global Trade Finance Gap” that took place in the context of the 2018 IMF/WBG Annual Meetings on 9 October.

The fourth exchange programme will be hosted by the Export-Import Bank of Ghana in 2019 and will involve other G-NEXID member institutions from West Africa.