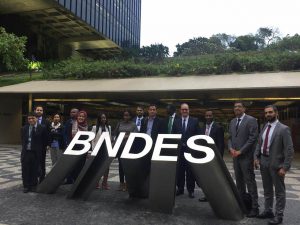 Brasilia, 10 November 2017 – The Exchange Programme organised by the Brazilian Development Bank (BNDES) for G-NEXID members successfully concluded on 10 November 2017 after 5 days of fruitful exchanges in Rio de Janeiro and Brasilia.

It was the second exchange Programme organised in the framework of G-NEXID, after the initiative from Exim Bank of India in September 2016.

Driven by G-NEXID’s objective to boost bilateral and multilateral cooperation among members, the programme aimed at familiarising participants with BNDES’s financing facilities, in addition to providing an overview about other Brazilian governmental institutions engaged in export finance:

The programme also included the 2017 Second Steering Committee Meeting, thus allowing members to take note of the achievements of the work programme for 2017 and consider the upcoming activities for the next year.