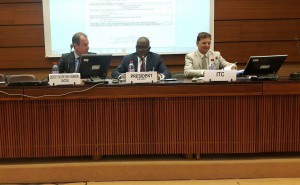 Geneva, 19 May 2016 – The 11th Annual General Assembly of the Global Network of Export-Import Banks and Development Finance Institutions (G-NEXID) wound up on 19 May 2016 in Geneva after three days of intense engagements on the Network’s operations and development issues.

Following his endorsement as the fifth Honorary President of the Network, Mr. Bashir M. Wali, Ag. Managing Director of the Nigerian Export-Import Bank (NEXIM), stressed that this Assembly, held on the theme “G-NEXID: 10 Years of Promoting South-South Trade, Investment and Cooperation”, provides members the opportunity to review the activities of the Network in the past decade and implement all activities outlined towards a memorable 10th Year anniversary starting with the Annual General Assembly and culminating in the launch of the Network’s maiden publication on 15 July 2016. Scheduled to take place during the Global Commodities Forum in the framework of the 14th Ministerial Conference of the United Nations Conference on Trade and Development (UNCTAD 14), in Nairobi, this event will offer the opportunity to present to the global trade and investment community the contributions of members and partners of the Network towards the promotion of South-South trade, investment and cooperation.

In line with the theme, the Network commemorated its first decade of operations with an agenda combining the review of activities of the year, with a focused discussion on a Strategy Document outlining the short term, medium term and long term goals, of the Network for the next decade, in addition to a workshop on recent trends in South-South trade flows. Furthermore, presentations from members and partners on their recent activities and opportunities of bilateral meetings reaffirmed the inclusive and participatory approach of the Network.

Referring to the “time gathering” represented by this 10 year celebration with the new global development framework characterized by the implementation of the 2030 UN Agenda for Sustainable Development, the Deputy Secretary-General of UNCTAD, Mr. Joakim Reitter, highlighted that the meeting offered the opportunity to strengthen the existing cooperation between G-NEXID and UNCTAD, especially in the light of the role of the Network in mobilising finance for development as trade is a key driver to development.

Aware of the importance of partnerships with other key trade-related organisations, the Network reaffirmed its closed cooperation with the International Trade Centre [ITC]) with the signing of a Letter of Intent towards an operational Memorandum of Understanding (MOU) for enhanced cooperation, as well as explored ways to develop cooperation with the Berne Union.