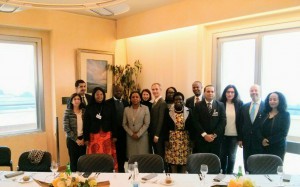 Working lunch at the restaurant of the Delegates of the Palais des Nations on December 9, 2016, with Mr. Yvan Decreux from ITC on the trade intelligence tool “Export Promotion Map”.

Geneva, December 9, 2016 – The 2nd Steering Committee of 2016 of the Global Network of Export-Import Banks and Development Finance Institutions (G-NEXID) wound up on December 9, 2016 after 3 days of intensive engagement combining bilateral meetings, a workshop on “trade regulations: implications for the financing of trade”, a thorough review of activities of the Network, and the consideration of the work programme for the years ahead.

Opened by the Secretary-General of UNCTAD, Dr. Mukhisa Kutuyi, alongside the Director of Enterprises and Institutions from ITC, Mr. Anders Aeroe, and Mr. Olatayo Omidiji, Assistant General Manager of NEXIM Bank (on behalf of the Honorary President, Mr. Bashir Wali), the workshop addressed three main issues: the importance of trade regulations for the financing of trade (positive or negative), international databases and surveys on trade regulation (UNCTAD’s TRAINS non-tariff measures data, Market Access Map and large-scale business surveys, and the Integrated Trade Intelligence Portal of the WTO for goods and services), and specific issues of interest for policy banks (treatment of concessionality in the statistics of OECD’s Development Assistance Committee and WTO rules on subsidies).

Members of the Steering Committee reviewed the work programme of 2016 and outlined 5 major achievements:

In addition, members considered the perspectives ahead based on short term, medium term and long terms goals embedded in the proposed “Strategy Document”. In this context, the importance of cooperation with key trade-related institution was highlighted as critically important for the success of the Network, including the operationalization of the MOU with ITC.

Other activities during the 3-day event, included an interactive session with the Business-2-Business Platform “Opportunity Network”, a post work shop cocktail reception and a working lunch with ITC on the Export Potential Map.

Programme of the workshop, description of the different session and bio of the speakers

Presentations during the workshop

Presentation during the working lunch

For more information on the 2016 Second Steering Committee Meeting, please contact the Coordinator of G-NEXID at: contact@gnexid.com.